Happy Friday/almost Friday wherever you are and welcome to TGIFF! I'm doing the happy dance again because I finally finished my 10BX Leaves wallhanging! Woo hoo!

This project began in a 10BX Fibre art class with Mary Pal at least three years ago. That was an awesome class where I learned so much. I remember saying, "it's like we're playing" as we went from one station to the next, experimenting with different surface design techniques. So much fun!

Where I got stuck with finishing this at first was the machine quilting. I wanted to do free motion quilting on it and some of the leaves needed to be stitched down and given veins. I pulled it out again last year and added some borders and began some straight line quilting to stabilize it. But I hated the brown so shoved it back on the WIP pile.

This project is on my Finish-along list so when I was trying to figure out what to finish for this week's TGIFF!, this baby called my name. I couldn't live with those brown borders though and wouldn't unstitch the straight line quilting. Light bulb! I cut off the brown and replaced it using quilt as you go. Why didn't I think of that ages ago?

I added the front and the back with a slight larger than 1/4" seam allowance so the brown was completely covered by the seam.

The quilting is mostly small leaves with curlicues and small stippling in a green variegated thread by Aurifil that I had in my stash. Perfect!

Then I faced it using Susan Brubaker Knapp's awesome tutorial et c'est fini! I'm much happier with the new fabrics.

[Edited: Also linking up to a new linky party for June finishes.] 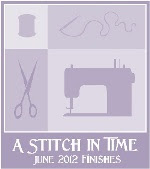