I thought I became a hard core quilter when I started quilting every day and writing this blog two years ago. The quilt I'm sharing with you today showed me otherwise. 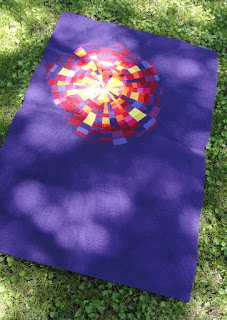 Hard Core began in a Liberated Radial Piecing workshop with Elaine Quehl in February, just ten days  after I'd broken my wrist (love her classes, btw!). I didn't think I'd be able to do much with the cast, but it turned out that the piecing technique was "liberated" enough for casted me to do it. Yay! And since I made the medallion with a broken wrist and it kind of looks like the core of the earth, I thought Hard Core would work well as a name. :)

Most of the other participants used beautiful batiks and hand dyed fabrics, but I'm still loving my solids so I went with purple, red, orange, pink, and yellow palette to see what they could do. I also seem to be in an asymmetrical phase so I placed my medallion off centre to the left. Perhaps it's because I'm a little leftie? Yes, perhaps in more ways than one.

Once the top was done, you guys helped me figure out the quilting. Thank you! Quilting in the rays seemed to win out. I knew that would work well for the negative space. I didn't think it would work so well in the wonky medallion part though so after some more experiments, I finally decided to go with a flame spiral in the medallion.

I used a variegated rayon thread in pink, orange, yellow and red for the medallion. Frustration! It kept getting caught coming off the cardboard spool and breaking. Love the colours, hate the thread. Once I got to the edge of the medallion though, I switched to Aurifil #2581. Oh, sweet heaven, what a difference! The rest of the quilting proceeded smoothly and problem free. :)

I did straight lines outward in alternating rays. In the remaining rays, I did different motifs - swirls, pebbles, flames, spiral flames, etc.

Fabulous, right? Yes, but guess what? After blocking it, you can't see any of the quilting motifs unless you are 5" away from it. All that effort and I could have gotten the same effect just doing one motif all the way around. Hmmm.

Hard Core is 39" by 56.5" and is currently decorating my dining room wall.

Lessons Learned:
Now don't get me wrong, while I'm disappointed with a few things about this piece, I still really love it, I learned a lot, and I'm proud of it! And, if nothing else, it confirmed that I am indeed a hardcore quilter. :D