Hey there, it's been a while, eh? As I mentioned in my last post, there's some not-so-fun stuff going on around here. Long story short: My mom had a bleed in her brain on March 6th, which prompted brain surgery and more exploring, which found lung cancer, but no brain cancer. She's recovering well from the surgery and more tests this past week will tell us whether her lung cancer is treatable. Yeah, it sucks. Really, really sucks! At least she's here in Ottawa so I can help her and bring her to appointments, etc.

All of this has meant no sewing until this past week. It's been frustrating not to be able to do what I know will help me relieve the stress. Some deadlines and overdue bee blocks are starting to wear on me so this week I carved out some time to myself and got back to the sewing machine.

First up was our Ottawa Modern Quilt Guild Block Design Challenge/Montreal Meetup Challenge. They are separate challenges, but I'm combining mine!

The Block Design Challenge is what I'm running for our guild. The idea is to challenge people to design modern blocks. Each month for nine months, I provided a starter block that has one or two lines in it for people to finish. There are three levels to this challenge:
1) Finish drawing the block any which way you want to.
2) Colour in the block.
3) Make the block and turn them all into a quilt.

Because we want to share the challenge quilts in May at the OVQG Quilt Show to showcase modern quilting, we put all nine months up in Flickr back in the Fall. A few people have already completed their blocks/quilts - huge kudos to Heather and Krista for leading the charge!

The Montreal Meetup Challenge was to design a quilt that is 30" by 40" and displays one or more modern quilt design principles. Our guild is meeting with the Montreal Modern Quilt Guild next weekend for a one-day retreat midway between Montreal and Ottawa. I can't tell you just how excited I am to meet up with the MMQG folks and just breathe quilting for a day. :)

Here are my OMQG Block Design blocks drawn out and coloured: 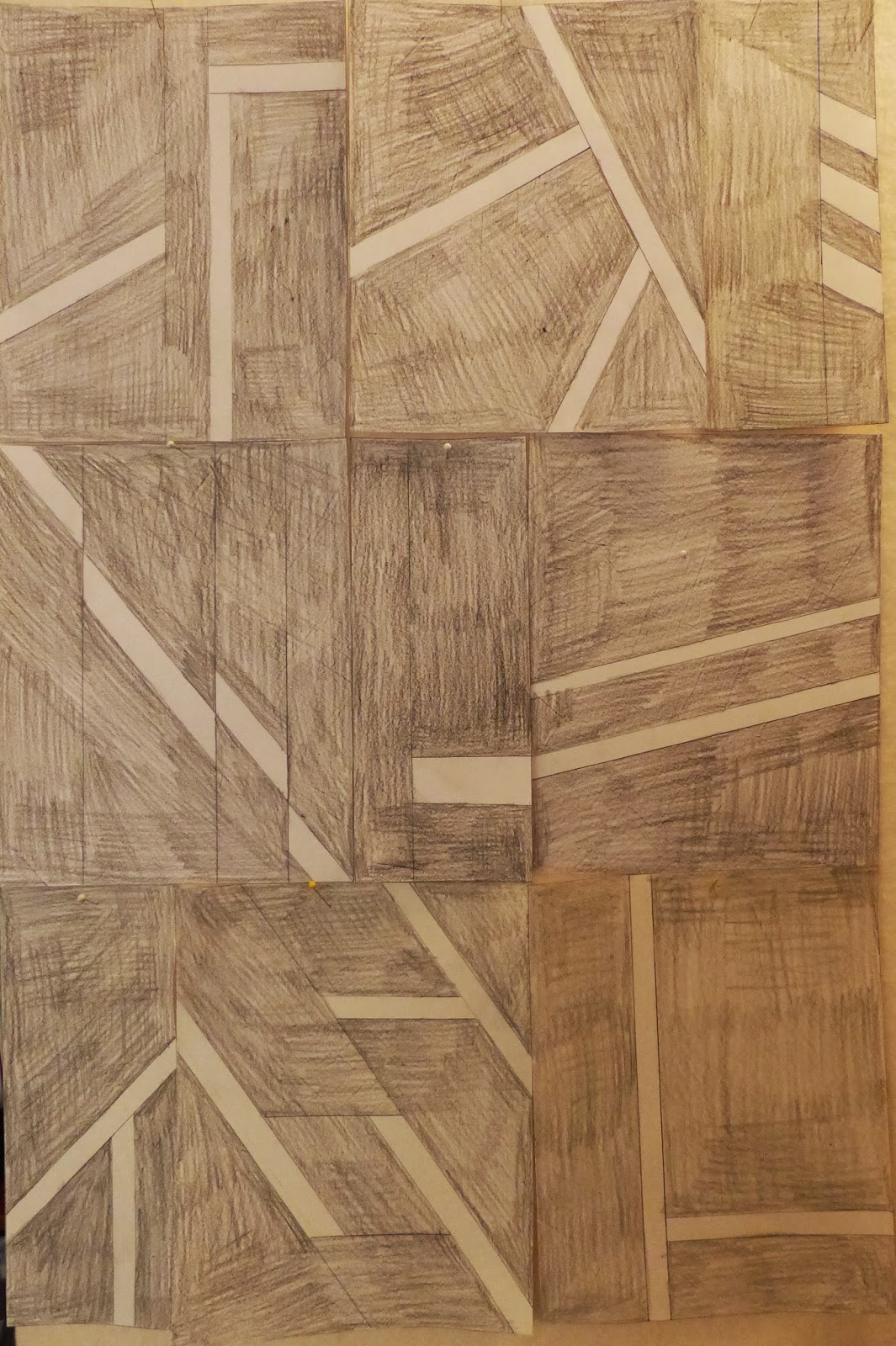 I had planned on making it in black and white, but the night before I started making it, I decided I needed some colour.

This is looking more like white and fuchsia, but it's actually a bone and wine colour. My blocks are pieced together either by paper foundation piecing or standard piecing. Don't let the simple design fool you, there are several partial seams in there! I think the blocks are arranged in the monthly order too. 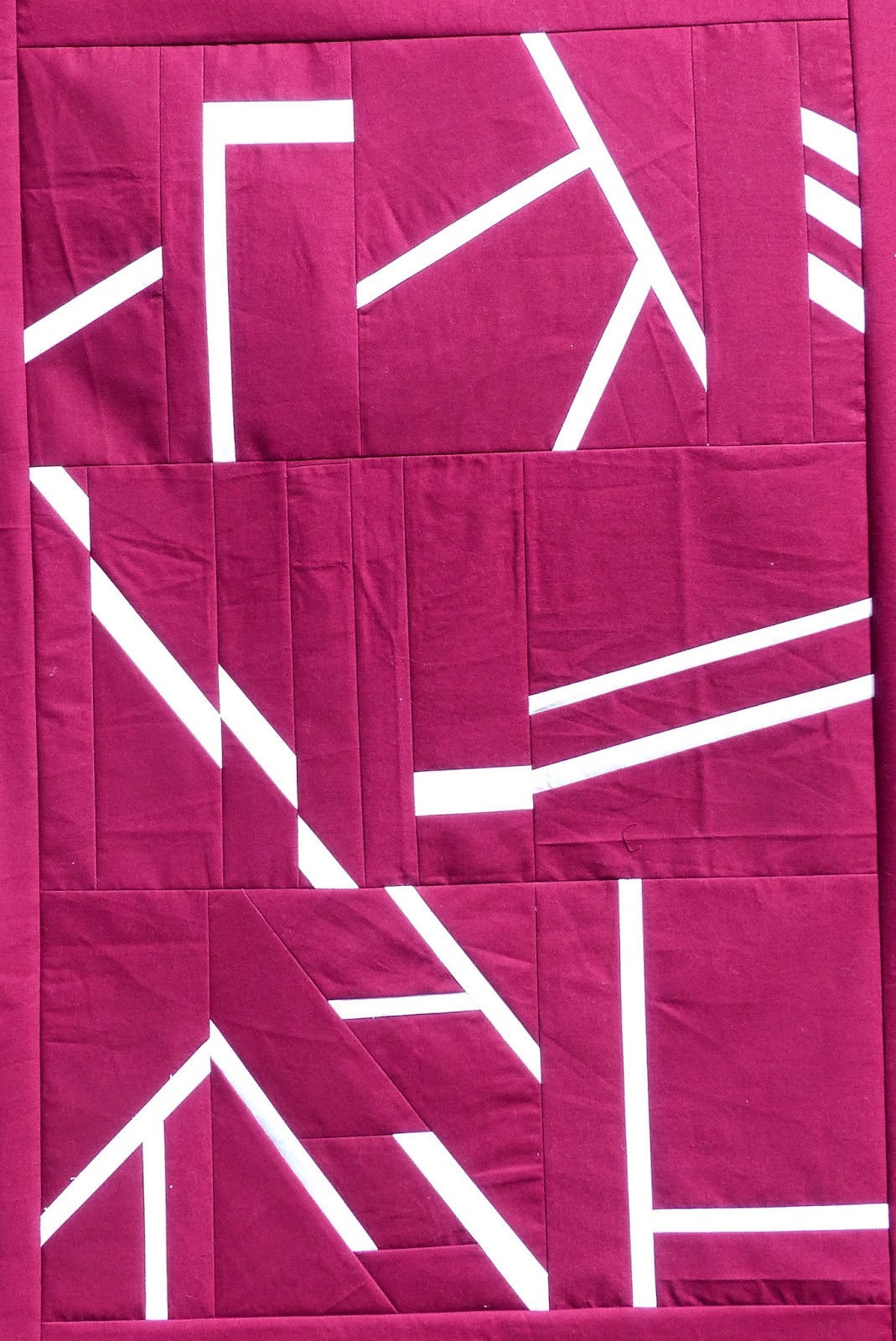 Then I added an asymmetrical border to get it to the 30" by 40" size for the Montreal meetup. 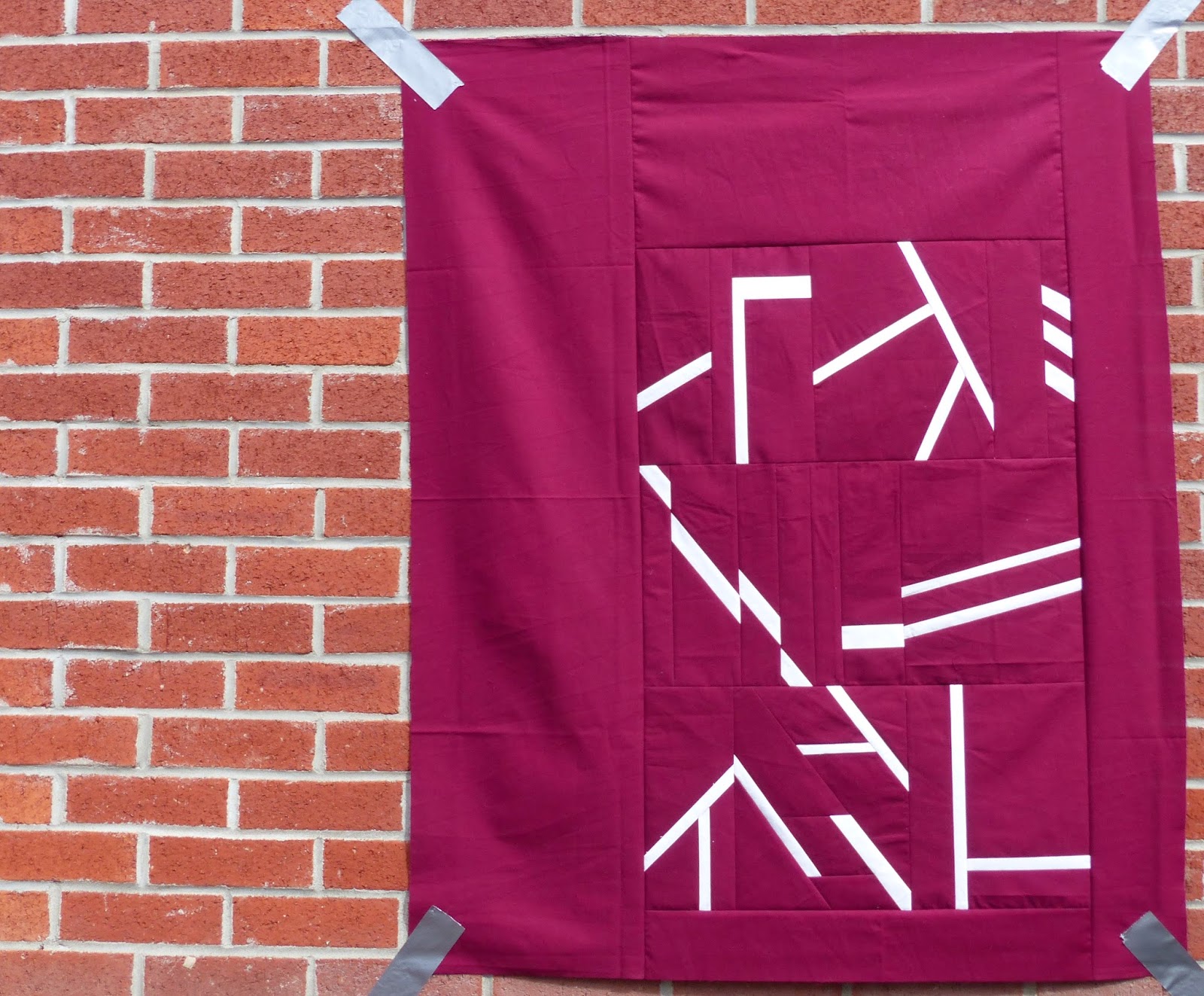 Kind of looks like it's a code of some sort...hmm.

I doubt I'll get it finished in time for next week's meetup but at least I'll have a top to share. Now to those bee blocks!
By M-R Charbonneau at April 11, 2015