It's been two weeks since I did a WIP report so it actually looks like I accomplished a lot. He he!

I've been getting my studio cleaned up and organized. It's slow going, but it's looking good so far, but there's still a lot more to go. I've also been getting at my scrap baskets and trimming scraps into strips or squares of various widths while watching TV in the evenings with the hubster. I want to use the scraps for a scrappy leader/ender project. I'm also intrigued with the idea that I saw on someone's site (sorry, I forget who!) Regina's Quilts about putting the unusable scraps into an old pillowcase. When it's filled up, I'll sew it closed and give it to an animal shelter. Love that idea! Thanks Regina!

New Projects:
Colour My World Pink - July's colour is pink. I've picked out the fabrics that I'm going to use, but I'd better get a move on this because the end of the month is coming up fast!


Completed Projects:
Don't Worry {Bee} Happy - July's Block is for Marian of Lady Face. She picked the Sunshine block from the recent Fat Quarterly issue. If anyone else is doing that block, be aware that you actually need 20 of the little aqua dots (white in the pattern), not 16. At Marian's request, we are adding in a fabric of our choice. I hope she likes my choice! 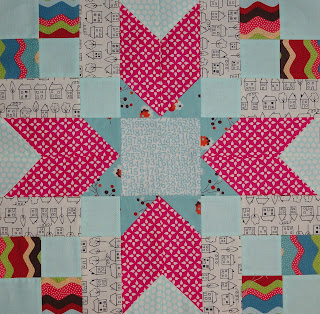 Placemat: Another placemat for Daniel. I love those monkeys! Patrick has picked out his fabrics, but it's been too nice around here to stay in and sew. This is a sad little attempt at trying to get my kids sitting and eating properly at the table. So far, it's still a gong show. 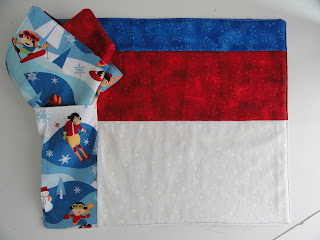 Sophie's Growth Chart: Finished and blogged about! I'm still pulling together the tutorial for it for the Let's Get Acquainted Blog Hop, which was organized by Beth of Plum and June. Fun! 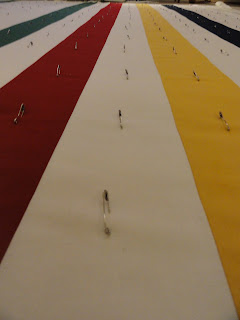 Seeing the Forest for the Trees Quilt: Blocks are complete! Playing with cornerstone and sashing arrangements. This? 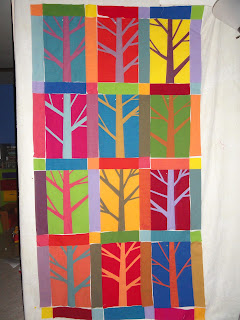 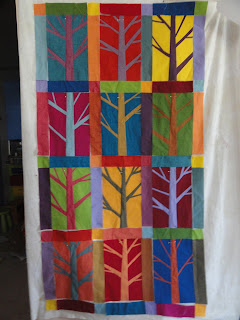 Can you even tell the difference? Me neither. And it doesn't really matter now because one of my kids turned on the fan and the sashing went everywhere. Oops. Now I remember why I didn't have a fan in that room. LOL.

Email ThisBlogThis!Share to TwitterShare to FacebookShare to Pinterest
Labels: W.I.P.s