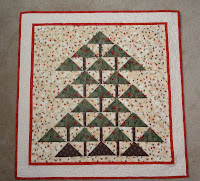 Welcome to TGIFF!, where every finish deserves a party!
Phew, this one came in just under the wire. I've been wanting a Christmas wallhanging (other than an advent calendar), for the last few years but just never got around to it.

Last week I was watching The Quilt Show video where Ricky Tims demonstrates how to make a one-seam flying geese block, to which I had linked back in June. I remember thinking that it's a really cool technique, but it sure uses a lot of fabric. That is, if you just want a flying geese block.

Mulling, mulling. What could you use the pockets for? Paper? Cards? And then it hit me that this technique could be used to make a holiday card holder wallhanging! I got a wee bit excited.


There was nothing to do, but try it out. I pulled some Christmas fabric out and made a couple of the one-seam flying geese blocks. It worked beautifully. I made a whole whack of the blocks and played around with the layout, before settling on this one. There are a lot of design possibilities with this block as a card holder. I already know that I'll be making more of these with different layouts and different fabrics.

And voila, a Christmas wallhanging and a card holder. And as it is a holiday card holder, I call mine Season's Greetings. ;) Now we'll be able to see the cards people send us rather than have them all jumbled on the mantlepiece. Fun, eh?

A couple of lessons learned on this one:
Quiltography: “Season's Greetings,” original design by Michèle-Renée Charbonneau, Ottawa, 29” by 30”, 2011.
By M-R Charbonneau at November 10, 2011